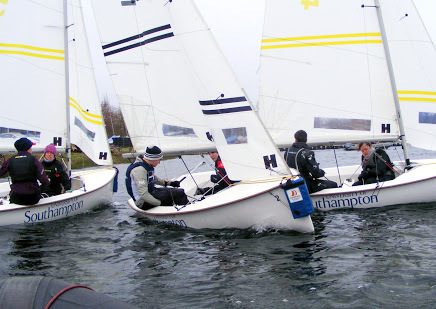 The weekend brought the Wessex Winter Warmer 2020 to Spinnaker. 18 of the best alumni and university team racing teams from around the country travelled down to race in one of the most competitive events on the team racing calendar.

Saturday morning provided a light fluctuating south westerly and luckily no rain! Teams arrived bright and early ready for a full day of racing and after a quick briefing, racing was underway before 10 o'clock. After our race officer and course manager managed to negotiate the course with the island, racing was soon up and running at full speed and over the whole day we managed to run a round robbin with over 160 races -every team racing 12 races. Cambridge Blue topped the day closely followed by Birdham Bandits and RTYC Blue. The day was then rounded off by a curry and social for all the sailors in Southampton.

The success of Saturday allowed us to move straight into the Gold Silver bronze leagues format. 6 teams in each league battled it out for a spot in the semi-finals with the first three semi-final spots going to the top three in Gold and the final spot going to the winner of the Silver league as a 'silver surfer'. The wind was a favourable 10-12knots from the south allowing us to rattle through the leagues swiftly. After some very closely fought league races the semi-finalists were Birdham Bandits, OCSS, Cambridge Blue and Exeter Blue as the Silver Surfer.

In the semi-final Birdham Bandits beat Exeter Blue 2-0 and OCSS beat Cambridge Blue 2-0 setting up an interesting final between Birdham Bandits and OCSS. Both the final and petit final provided some very competitive team racing with Cambridge taking third and Birdham Bandits clinching the title of Wessex Winter Warmer Winners 2020.

All results and summaries can be found at this link.