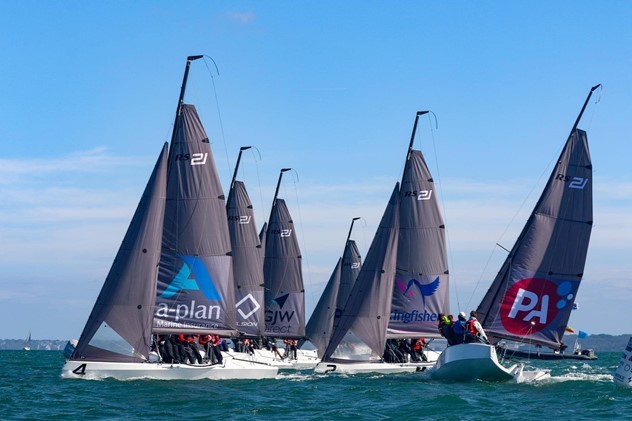 The British Keelboat League finals saw 14 teams from around the country battling it out for the title, in a breezy weekend of 6 boat short course racing. 4-person teams from each club rotated in and out the RS21s, making good use of the supplied disinfectant, to complete a total of 28 races (12 per team) over the weekend.

After the smoke cleared, Spinnaker SC stood victorious! (In their face masks, of course).

After a last minute change of venue, Berthon marina (Lymington) kindly took the fleet in for what was to be some shifty, blistering, no discards given racing.

As 25 degree oscillations made their way down the course, Spinnaker helm Joe Burns thanked his stars that he'd stolen his dads aero, and spent the last few weekends being shown a thing or two by the Spinnaker pursuit racers.

Day 1 of racing saw the Spinnaker team off to a strong start, banking six race wins and a third. Behind the results however, mistakes were still being ironed out. Star bowman, Calum Healey (known to frequent spinnaker for some team racing in the Southampton Uni team), momentarily lost his face mask, causing the boat to be penalised by the hawk-eyed Jury. It was not forgiven easily, and he did not receive any end of race Haribo. It doesn't matter if you can drop the kite faster than anyone else on the Solent Calum (or if you bought the haribo).

The final race of day 1 saw Spinnaker crossing the line in 6th, after helm Joe got far too excited on the start line, and had to battle their way back through the fleet for an individual recall. Overnight, West Hoe sat in the lead with a fantastic performance, placing in the top 2 every race. Spinnaker lay in second, with Clyde Cruising Club biting at their heels in third.

Day 2 began with an interesting race for spinnaker. Trimmer Emily Robertson, who had been the life and party of the boat so far, decided to head butt the boom during the first gybe. She lost. Following this, Joe ignored Main Trimmer Ed Haynes' spot on lay line calls, leading to some fruity reaches into mark rounding's, and thus Spinnaker took 4th in the race. There was a lot of work to be done to catch back up with the event leaders.

In the races that followed, Spinnaker pulled it together and took 3 more race wins, making sure to pressurise West Hoe SC for mistakes in the process. The numbers looked very tight, as Spinnaker came off the water and headed to the pub to work out if they'd done enough to catch up. Many of the other teams had more races to complete, in particular West Hoe, with 4 to go.

For those of you who like the details (like myself), West Hoe needed to place first in 3 of their 4 races, and at least second in the other in order to win. The first pint was nerve-wracking, as the live results came in on K-Sail (http://events.ksail.co.uk/2020/BKLFinal/DisplayResultsSummary.html ). Ed refreshed the page. West Hoe finished a race in 4th! After that, the second pint went down far better.

Big Thanks to RS and the RYA for hosting such a great and safety conscious event. Special thanks to Jack Fenwick, Keith Sammons, the Umpires, and all the supporting helpers who gave their time up to make it all come together. We thoroughly enjoyed ourselves.

Photo - Spinnaker SC in Boat 4, choosing the pin off the start.