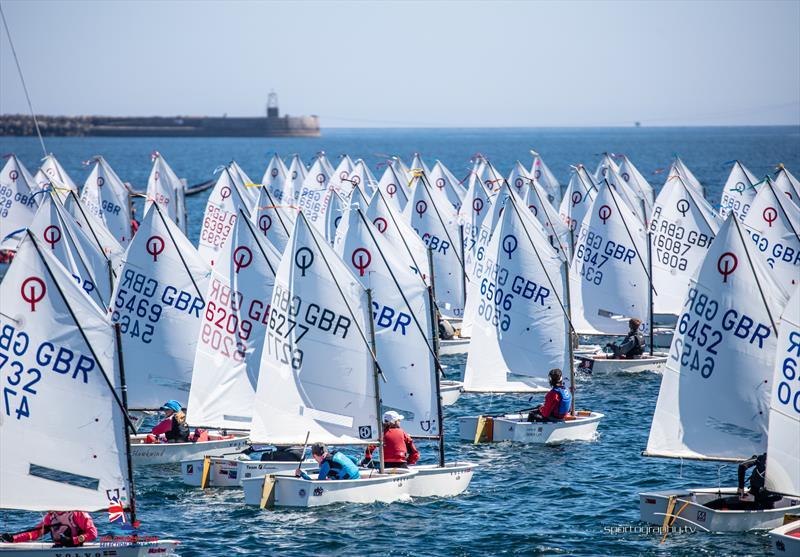 I just competed in my first ever regatta the Optimist Nationals at WPNSA. It was a real adventure.

On Saturday 27 July 2019, we dropped off my Optimist at WPNSA. It was amazing to see the facilities and to see the beautiful vessels all around the bay, including The Black Pearl which was moored in the harbour. Unfortunately, we just missed the opening ceremony, but we quickly found the group from Spinnaker, unloaded my boat and then went straight to the campsite where we were staying.

I was really excited that we were staying in the same campsite as my friend from school, Rory, who first brought me to Spinnaker two years ago. Also on the campsite was Robbie Hudson, who I also know from IOCA pre-zone training at Bosham last winter, and who sailed in Junior Fleet Gold, and my friends from Spinnaker, Toby and Rowan Sherrington and Daniel Llewellyn, who sailed in the Regatta Racing Fleet, and Elizabeth Hudson and Beth and Abi Llewellyn, who were with me in the Coached Regatta fleet. When we weren't at WPNSA, on the water or waiting to go onto the water, we played football, rugby, cricket or Manhunt on the campsite.

I registered for the regatta early on Sunday morning, and then, on the first day of racing, those of us in the Coached Regatta fleet was divided into flights. I was put into Zebra flight with coach Alex, who was great. Helping Alex, and all of the other coaches was another friendly face from Spinnaker Adele Young.

When we finally got onto the water, we did a practice race which seemed to go quite well. Then, in my first counting race away from the club, annoyingly I missed the start, along with half of the fleet. I had been told to stay away from the start line and went too far back. I couldn't get back upwind to the start in time. I stayed out in the hope of there being a second race, but there weren't any more races because it was very late.

Sailing was cancelled due to high winds on Tuesday and Wednesday. On Tuesday we visited Portland Bill where the waves crashed against the rocks so loudly that you could hear them in the car park. We then went to a café where I met a man who introduced me to an app called Marine Traffic which tells you about ships and what they are doing. In the evening, we played football on the campsite. On Wednesday morning we were expecting to go out racing in the afternoon. In the morning we learned how to use a fid to splice ropes. We then waited in the dinghy park for about 5 hours. Racing was ultimately cancelled for the day, but some of us eventually had the chance to go out into the harbour and do some training in the late afternoon.

On Thursday and Friday, we returned to racing and did some simpler courses in the harbour. On Friday, we had lunch on the water. We all sailed up to the rib and tied our boats up. We climbed aboard the rib and had our lunch in the middle of the bay, next to a lobster fishing net. It was really fun because I have never had lunch like that on the water before.

I learned an awful lot about racing. I had an absolutely brilliant time.

I was lucky enough to have the chance to sail at Royal Lymington this week, and on Monday I won my first race; the practice race!

I have had so much fun over the last two weeks and I would like to thank everyone at Spinnaker who has supported me. I am really grateful for all of the help that I have been given, particularly by the instructors who have coached me, and the Young family who have all been so incredibly helpful in teaching me (and my parents) how to rig an Optimist.