2nd of the April mini series 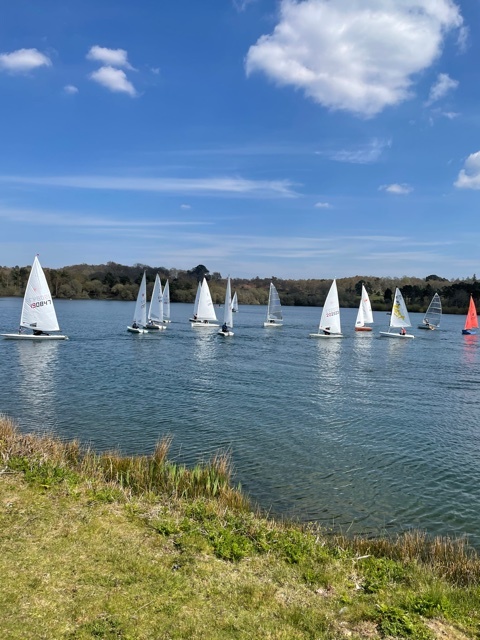 On a sunny mild day in the Pursuit race Amanda in the Lightning 268 prevailed ahead of Michael's Solo, Paul's Laser and Jae's Aero in hot pursuit. So again the opportunity to succeed for a variety of boats in this popular format is shown.

After a 30 minute interlude the Race Team tried to fathom what the wind would do t set course for the 3 short sprint races back to back. It continued with a light North Easterly that Saw Keith get out to over a minutes lead around the P shaped course - as used for Saturday's Topper open. Rick and Nick next in the solos as the wind fell way.

Race 2 proved problematic as the wind swung to the South and become very light. Hastily changing green flags red allowed the course to be sailed backwards. Again Keith got to the windward mark ahead. A becalmed scene ensued though after much light air skill Keith found his way clear to lead the fleet in. Congratulation new member Jerry podiuming in the 1969 Mirror and the Comet scoring well.

Just as the second race finished a freshening proper sea like breeze came in. The lasers relished in marginal planing conditions including some broad reaches and Lasers of Peter, Ian and Phil took line honours with Robert a creditable 4th in the Solo.

Overall it was lasers prevailing in the series with Keith, Peter and Ian on the podium. Well sailed all and thanks Tim in safety cover and Rob for results.