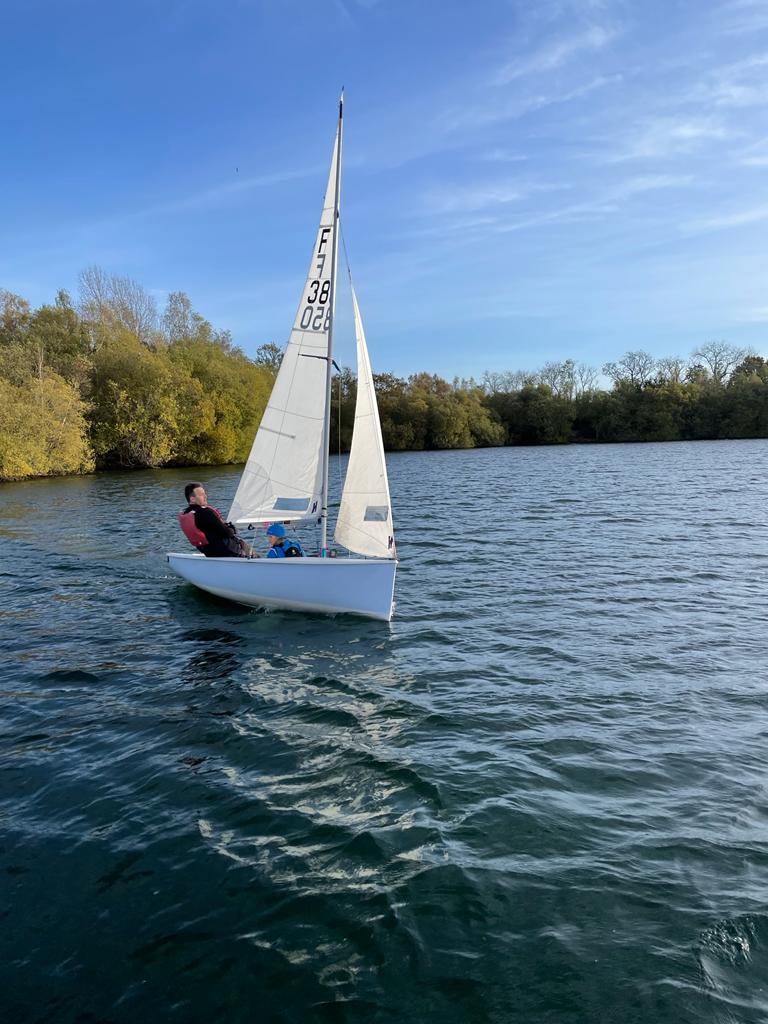 We have just held our annual Firefly Weekend! The Saturday is our Twisted Tube Random Pairs Team Race event, a day with lots of fun racing (we managed 48 this year), with our Firefly Open on the Sunday. You can view the complete results from the weekend here. Thankyou to RCS Tom Clay for the write ups of the weekend below!

Nineteen eager Firefly crews gathered at Spinnaker Sailing Club on Sat 6 November for the Twisted Tube Random Pairs Team Racing. There was a brisk Westerly breeze varying in strength between Force 2-4 but with occasional stronger gusts and this allowed a full schedule of races to be run. In Random Pairs you sail every race with a different randomly chosen team mate against two randomly selected opponents. In two boat team racing, the team with a boat in last place loses. The Twisted Tube is a famously friendly event with everyone accepting and embracing the wide range of skills in the fleet

There was a wide range of talent in the fleet with top Firefly sailors like Rob and Mel Sherrington, Chris Kameen and Sally Wilson, and Stuart and Robbie Hudson. There were teenagers from Spinnaker Club and Winchester College, students from Wessex Sailing Club first team and top Team Racers like Ben Ainsworth. Ben's crew for the day was Toby Sherrington which gave extra interest when they met Rob & Mel Sherrington in Race 30. Ben and Toby and their team mate Ed Beveridge won that race

The Race Team ran 48 races in the course of the day with every crew sailing at least 10 races. In a random pairs event the winner is the crew who loses the least races over the day and the clear winners with only one loss all day were Chris Kameen and Sally Wilson. Rob and Mel Sherrington were second with two losses and Ben Ainsworth and Toby Sherrington third with three losses. All the crews enjoyed the day and all at the event won at least two of their races.

There are pictures of the day on Flickr which are by Paul Gray (member of Spinnaker SC) who has given permission for any to be published https://flic.kr/s/aHsmX4WjiL

Spinnaker Sailing Club's Firefly Open Meeting on Sun 7 November saw a select group of ten crews gather, a number of whom were nursing sore heads after the Firefly 75th Anniversary Dinner the previous night. Spinnaker blew away the cobwebs by running seven sprint races in the course of the day each with a target race time of 20 minutes

The crews were faced with a blustery Northerly wind which brought large shifts and holes especially approaching windward marks. Stuart and Lizzie Hudson dominated the day from the first race which they won from Ted and Ella Ashworth. They won the second from Ed Morris, the third from Sam Petty and Fi Edwards and the fourth from Ted and Ella again. After a break for lunch, Stuart and Lizzie were not as dominant off the start line in the afternoon, mainly because Stuart was OCS at the start in two races and had to go back. It made little difference in Races 5 and 6 which they won first from Ted and Ella and then from Ed Morris. Although they had won the Open meeting, Stuart and Lizzie raced the last race, mainly because Lizzie was enjoying herself so much. This did lead to a small dent in their dominance when Ed Morris broke away to win the race from Stuart and Lizzie.

Congratulations must also go to Robbie Hudson, crewed by his mother Jane who was helming a Firefly for the second time in races and came in a very creditable seventh. The Open Meeting was won by Stuart and Lizzie Hudson from Ted and Ella Ashworth with Ed Morris coming third.