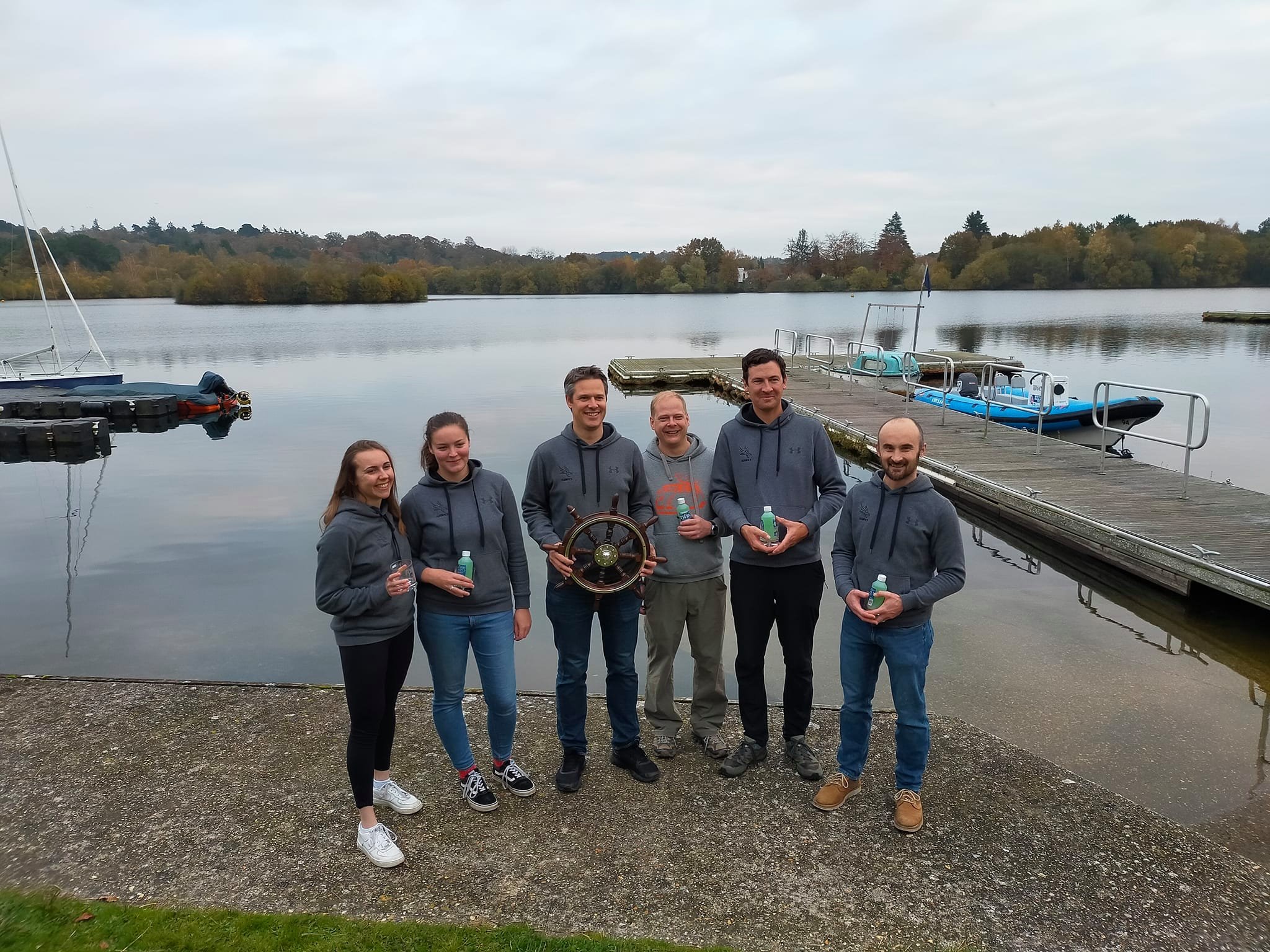 Supported by the UK Team Racing Association, RYA, kSail and host club Spinnaker SC, it was a welcome return for the much anticipated championship after the event was blown off in 2019 and then cancelled in March 2020 and March 2021 due to Covid lockdowns.

There were a wide range of teams in terms of both in age and experience. Entries included two school teams from Magdalen College School and Claires Court School and two teams from Rutland SC, one of which (Rutland Green) included as helms Jamie and Ben Tylecote, fresh from winning the Eric Twiname Youth Team Racing Championships, sailing with their father Steve as the third helm. The defending title holders, West Kirby Hawks, were accompanied by another West Kirby team, and there were a variety of University and Alumni teams competing.

The event saw 144 sailors arriving on Saturday 13 November for the sell-out event to find a windless lake. Fortunately, the breeze filled in to allow racing to start around 11.00am.

The light breeze slowed changeovers of teams but before the breeze shut down around 4pm, 71 races had been run, providing sufficient information to seed the teams into Gold, Silver and Bronze.

The last race of Stage 1 on the Sunday morning sorted the final place in Gold, and Assistant Race Officer Jo Sammons had produced schedules for the first 30 races of Stage 2 to allow racing to be continuous. After 72 races there were four teams that had won all their six races, Cambermet Cardinals, West Kirby Hawks, Cindies SC and Wessex Exempt.

The Gold, Silver and Bronze leagues required 84 races to sort the semi finalists and there was some aggressive and tight racing. West Kirby Hawks suffered their first defeat of the championship when Rutland Green converted on the last beat to win 2, 3, 4. The Hawks in their turn inflicted a first defeat on Cindies SC winning 1, 2, 4. At the end of 84 races the top four in Gold were West Kirby Hawks and Cindies SC with six wins each and Cambermet Cardinals and Rutland Green with four wins.

Rutland Green had lost to Cambermet when the two teams met so Rutland Green went into a one race repechage with the winner of the Silver League, Royal Thames YC Blue. RTYC Blue had a disappointing Saturday winning only half their races but dominated Silver with seven wins out of seven. They continued this success by reaching the semi finals by defeating Rutland Green 1, 3, 5.

The final was thus between West Kirby Hawks and Cindies SC and West Kirby Hawks retained the title they won in 2018 by winning their two races 1, 3, 4 and 1, 2, 6. Cambermet Cardinals won the petit final to come third. Full results can be found here.

It was a fifth championship win for the West Kirby Hawks, who also claimed the title in 2009, 2010, 2011. Andy Cornah from the team said: "It was a fun event and nice to come away with the win. We've been doing it a long time and we're good friends we just rely on our experience and for us we've done the hard yards back in the day so it's a bit of a nod and wink to each other and we kind of know what each other is doing, so we have that advantage.

"It was impressive to get all the racing in with the tricky conditions and from our point of view we just really enjoyed being able to go racing at an event again. Team racing is good fun and it's sociable and I've always loved it just because it pushes all the sailing skills.

"There were some really good close races and there were sailors in their 50s and teenagers there, and one of the great things about our sport is that we can all compete with and against each other and enjoy doing it. We're just really grateful to be able to be back out team racing and fingers crossed we're back to normal now and it will all carry on."

The racing was run by PRO Keith Sammons of kSail, who gave all 24 teams a minimum of 13 races, and thanks also went to Spinnaker Race Team and all of the volunteers, who included 12 umpires.

With not a single race sailed for the championship since 2018 and with the 2016 to 2019 editions all having been affected by adverse weather it was the first full programme of racing for the event since 2015. Keith said: "It's brilliant that we managed it and that we actually got a good set of races in that gave us very fair results at the end of it. The competitors to a tee could not have been more engaged in wanting to have a good event. Everybody wanted to make it work, which from my perspective was great, and it's just nice to be back. It's good to be team racing again.

"A huge thanks to the club. The boats, equipment and facilities were excellent and the club and all the volunteers and umpires delivered a really good event in tough conditions."

RYA Racing Services Manager Niall McCleod added: "It's great to see team racing back up and running and a lot of people have put a lot of work into making it happen. It's been one of the hardest hit disciplines over the pandemic because of the nature of it so it's really good to get these events going again."

The aim is to now get the RYA National Team Racing Championship back on schedule with a return to its usual place on the calendar in Spring, with the next edition taking place at West Kirby SC over the weekend of 26-27 March 2022. Save the date!